When I was little, my mother, my father and two siblings lived in a century old home in the heart of coal country, Pennsylvania. It was the early seventies when we moved in. My Mother stayed at home with us while we were young. She got a job as a legal secretary shortly after. My father went to work for the railroad. The house was half of a duplex. When you entered the home, there was a small seating area which lead to a hallway leading into a kitchen to the rear of the home. Naturally, we spent a lot of our time in the kitchen eating, cleaning or just spending time together.

From the bottom of the stairs that landed in the kitchen, you could see up the stairs to the second floor. To the left, a bathroom and the master bedroom. To the right, two smaller bedrooms. My brother shared a bedroom and my sister had the nursery, which later was turned into her bedroom.

My high chair, before my sister arrived was positioned next to the rear door of the home in the kitchen. From my high chair, I could see the landing and the tip of the staircase. I can not honestly remember whether these memories I have are impressions from my parents or if they are real memories.

My memory is of an elderly gentleman dressed in dress slacks, a white button down and a long tie. He wouldn’t say anything and if engaged would look at you. But he liked to walk across the top of the stairway while we were eating and gathering in the kitchen downstairs. I remember this happening occurring several times, more that several times.

When we moved out of that house in ‘79, it never happened again. We moved into another duplex but this one, newly built on newly developed corn fiends in a suburb of Allentown, PA.

My Mother died in 2016. She had died of cancer. She had at least two, possibly three types of cancer during the last ten years of her life. She had several surgeries to combat and used natural medicine to combat it during the last three. As I said, she fell to cancer in 2016. After she died, I took over the payments for my mothers car. It was new, we needed one. It didn’t seem right just to let it go. So I took it home, parked it in the driveway and that became my wife’s new car.

It was close to Christmas on a weekend in 2016. I was off. So was my wife. It was early in the day. It was a warm afternoon in December. I crossed in front of the car which was parked facing the garage.

When I returned walking toward the front door and recrossed in front of “Mom’s car”, I looked into the car. I saw her. The likeness of my mother, deceased two months prior was sitting in the the passenger seat of her own car. I could not believe my senses. She was seated like anyone in the passenger seat but she was looking up the street. Her “body” was facing the front of the car but she was looking out the side window. She looked at me and then she turn her head and looked back down the street again. She said nothing.

My wife, my siblings all had remarked I had not cried since Mom had died. I consoled them all in their grief and even at the memorial service we had at the church and later at the burial, for me, no tears were shed. Not until she visited me. When I saw her likeness, I lost my emotions. Tears flowed and I can not remember ever being so upset in my life since or before.

When my mother was alive, my brother and I and even my sister consented that she was the baby in the family and the favorite to them both.

When I told my brother and my sister of my mother’s spiritual visit, both responded in the most peculiar way. Both were still grieving, particularly my sister as she had an uncommonly close relationship with Mom.

They both responded in jealousy. As if to say, “why you?” I am the oldest and Mom had a special place in her heart for all of us. I can understand their reaction.

In the days to follow, I spoke out load to her as if she could hear me. I asked her not to visit me anymore as it was just too painful to see her in the body when my mind tells me I am not seeing what I knew I was seeing. To understand that we would have to open up the can of worms labeled “Catholic upbringing” and I have put all of that away. We aren’t going to crack it open here. Just suffice to say, I do not enjoy this “sixth sense” my mother has passed onto me. She could know things. Things she had no way of knowing about her kids, me included. She was touched with many gifts. She was highly intelligent. She saw the man at the top of the stairs. We talked about it while she lived.

Believe or don’t believe. I have never told anyone except those closest to me and to date, has not happened again.

You’d think I’d be used to not having her and most days it’s ok. But this day is the hardest. Constant reminders all day that she is gone. It really sucks.

She appeared again. It was later one night I’m August when I was in my bathroom just finishing up my shower. I have a clear glass shower door. I had just turned the water off and grabbed the door to get out when, all I can call it is, a spectral light hovering over my garden tub. It hovered a minute or so then it was gone. What was it? I don’t know. My mind is open to any possibility. 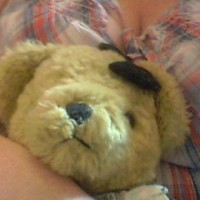 The Blog Of My Journey Of Becoming A little girl

Some of my writings are NSFW. Fair warning. I write about my life, my love and the things that interest me. Please feel free to comment, ask questions or simply agree or disagree with my points of view. They are welcome. Thank you for reading.

My Submissive Journey in a Life of D/s Slavery

Information and Guidelines compiled from various Expert's works and articles.

f/f spanking stories/ 18 and above

The Wolf in the Night Sky

A Blogspace for a Daddy Dom

A Unique Title For Me